As a completely custom, built-from-the-ground-up blockchain protocol, QORTAL’s core network is run and maintained by Minting which is the process for ‘finding blocks’ on the network

Unlike Proof of Work or Proof Of Stake where the single reward goes to the block signer, Minting rewards a portion of EVERY block reward to all nodes minting on the network! Say good bye to the battle of MINING and welcome in a fair new system where everyone is rewarded for EVERY block minted.

Minting does not use high amounts of electricity, and it also does not require the users wishing to mint, to have a huge amount of QORT or any other asset with which to do so.  Instead, minters must prove themselves as a ‘productive member’ of the network, in order to be a minter.  This is more ‘Proof Of Time’ than Proof of Work.

Qortal’s developers believe that minting is a superior method in multiple ways, as it not only has no coin holding requirement for minting (thus minting does NOT favor the users with more capital), but it also focuses on ensuring a strong and ever-expanding network of full nodes on the Qortal Network. This method leads to a much stronger base node network, and will be much less likely to run into issues like other blockchain projects do, wherein their base network has a lack of enough full nodes, which makes the chain much less secure overall.

This is against the principles that Bitcoin initially put into the world. The entire idea of the Bitcoin system, was to be totally decentralized and put the power in the hands of the people. The way things are going now in Bitcoin and many other projects, is the exact opposite of these ideals. Qortal aims to go back to the original Bitcoin concepts, putting the power solely in the hands of the users on the network, and maintaining a very strong network with full nodes spread out across the globe.

In Qortal, there is a system of ‘levels’ that are given to those who choose to become a minter.
At first, the minter account type is the only type that can obtain and gain in levels. This means that the minters are the only ones who can vote for changes in the system, create committees, and any of the other aspects that are relevant to the leveling system.

At a later date, leveling will apply to other Qortal account types (see Account types ) giving multiple different types the ability to ‘level up’ in the system, and gain more voting influence, form committees, etc.

For full breakdown of leveling please see info in our Wiki!

– Minting does NOT reward you based on QORT coin held, but by simply verifying you are a legit full node and online.
– Minting rewards are NOT reliant upon being the signer of the block.
– Every minter is rewarded EVERY BLOCK in Qortal (approximately 60 seconds).
– To become a minter, a new account must be ‘sponsored’ by a level 5+ minter, or a founder at any level.
– The limitation of creation of minting accounts is a security feature to combat gaming the system.
– The period of running a node to become a level 1 is set at 7200 blocks (after obtaining sponsorship and about 5 days to complete at 1440 blocks per day).
– Other portions of the system are possible to change in the future as well.
– The period to become a Level 5 takes approximately 14 months in which the account can begin sponsoring others.
– The highest level for a Qortal account is Level 10. The period to become a Level 10 takes approximately 7 years 9 months.
– The system VERIFIES online minters, utilizing the minting keys. So you MUST STAY ONLINE to be rewarded.
– The whole point of minting, is to GROW AND MAKE THE NETWORK STRONG.
– Only a node that is YOUR NODE, can be used as a minting node. You cannot access the assignment of minting keys without having full localhost access to the node you’re attempting to
– Each 2 level ‘tier’ shares a set reward percentage of EVERY BLOCK.
– As your level goes up, you eventually move into higher leveled tiers and your shared reward percentage increases.
– The highest level for a Qortal account is level 10.

The method to accomplish this, is described here Becoming a Minter 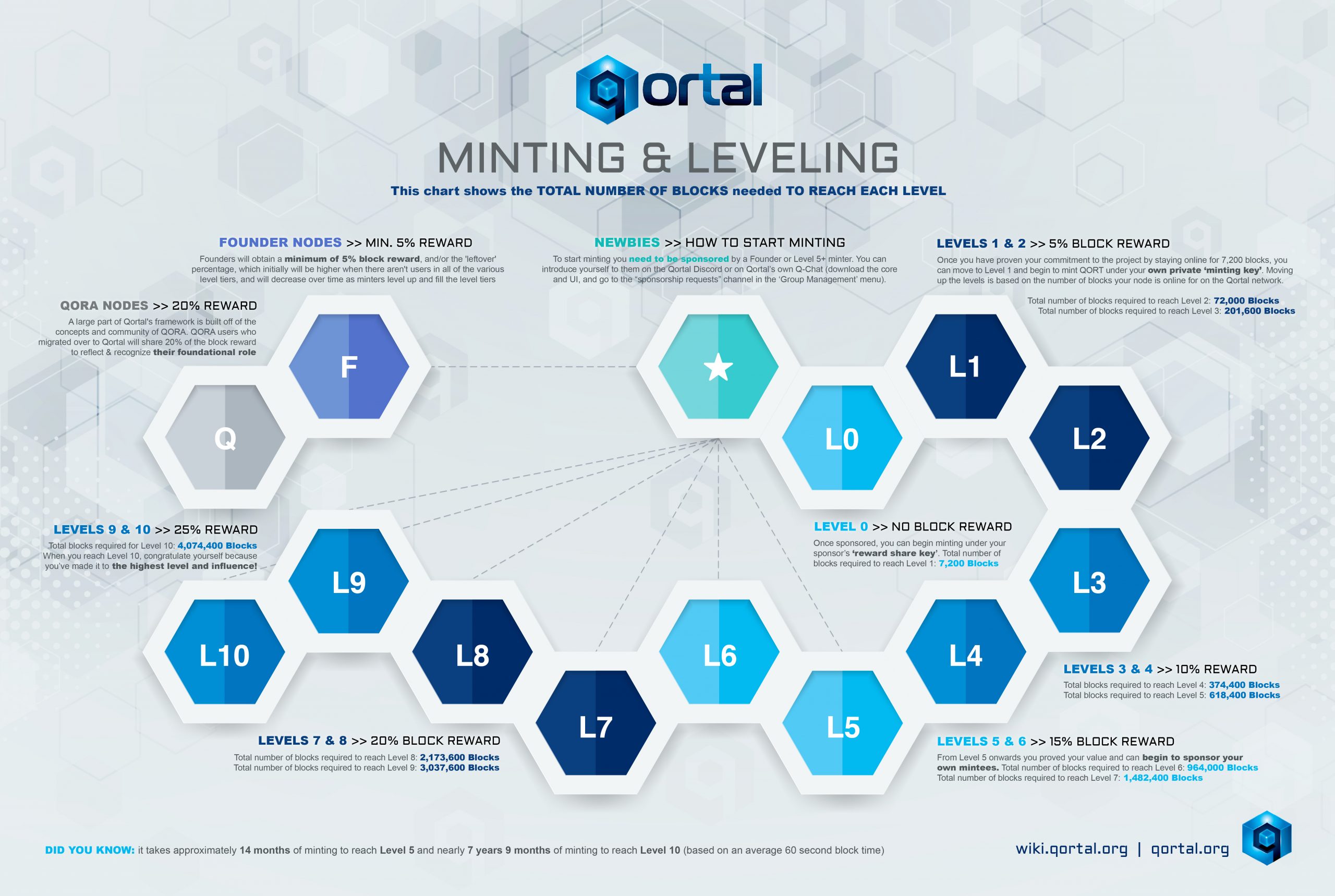