QORTAL is a completely unique blockchain-based infrastructure platform capable of rebuilding the internet entirely, as well as establishing the framework for a worldwide economic system based on individual input for gaining influence on the network.

QORTAL completely removes the ability to gain any influence by monetary means. Rather than financial input or computer power, QORTAL uses time as the value metric for importance as a node on the network.  No longer can a user begin with a large amount of money and have an advantage. This creates a truly fair and honest ecosystem wherein users may provide their assistance, support, and various methods of input in order to obtain larger influence on the network and weight on the voting system that decides its future.

What Is The QORTAL Project? 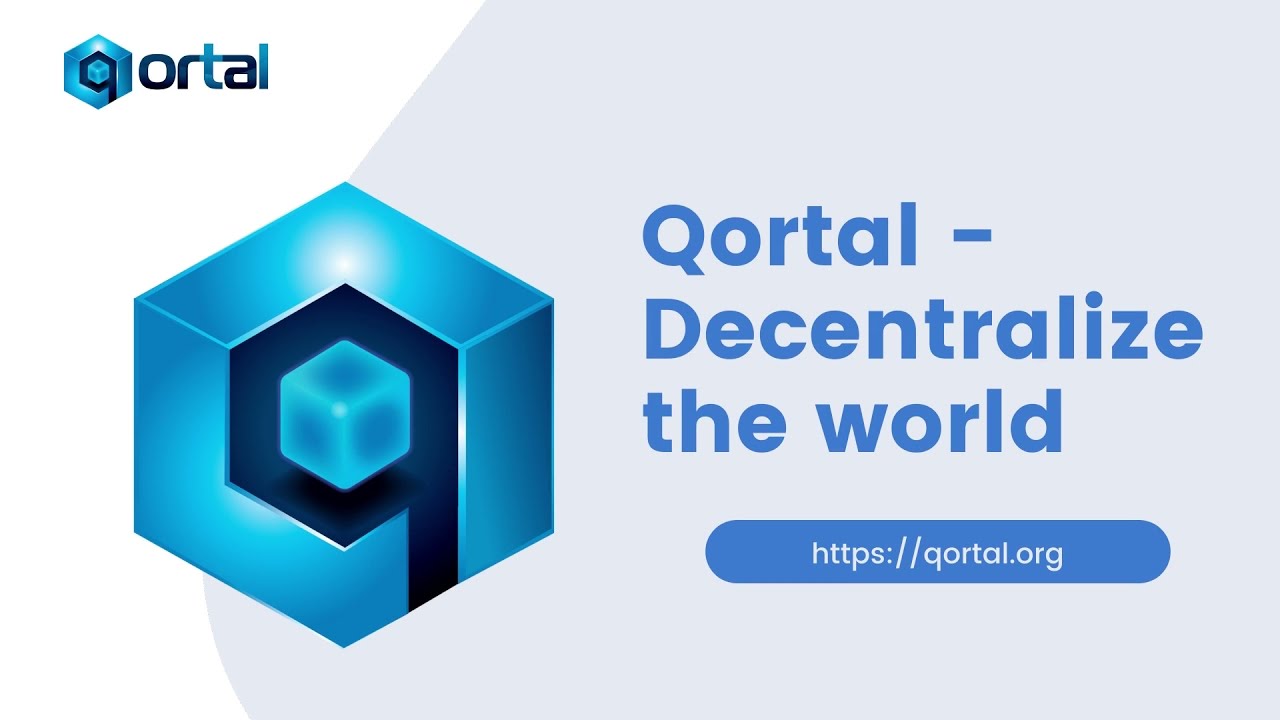 How blockchains are meant to be - In line with original Satoshi ideals.

The concept behind Bitcoin’s original whitepaper was to have users mine coin on their home computers as incentive for supporting the network. Over time, as developers took over the direction of Bitcoin, this innovative concept for decentralization was corrupted by the development of mining software and expensive hardware specifically designed to mine BTC.

This led to the centralization of power on the Bitcoin network, allowing those who have enough money to buy massive amounts of ASIC machines, to control consensus and earn most the rewards.  Now the future of the network was in their hands.

QORTAL’s Minting System removes the influence of money over the network. Instead it uses time  as its main measurement of influence, where users upgrade to higher levels of influence the longer they run a full node supporting the network.  To become a Minter, and receive a reward every time a new block is signed, one must receive a sponsorship by another Level 5 or higher minter.

A sponsor in Qortal does NOT get ANYTHING for sponsoring a new minter into the system, Qortal does NOT work like that. A sponsor is merely a method to limit minting account creation and provide a human verification element to the system. Sponsoring your friends and family is the goal of the Sponsorship system, to build a completely legitimate network with REAL people involved.

There will also be a ‘sponsorship board’ created as soon as Q-Apps go live, that will allow users looking for sponsorship to post a ‘card’ with details and tags about themselves, even a link to an entire page with videos and pictures and content if they like. The sponsors in Qortal will then be able to browse the board and find the people they would be willing to sponsor, click ‘sponsor this user’ and the sponsorship key will be sent to the new minter. Many more ease-of-use features and functionality will be implemented as time goes on and Qortal continues to evolve.

The ‘Become a Minter’ and ‘Sponsorship’ plugins were just released in version 2.0 of the Qortal UI. These new plugins dramatically reduce the difficulty in creating and assigning minting keys, explain the minting system clearly, and dramatically improve the ease of creation, tracking, and removal of sponsorship keys for sponsors.

Level influence is used in the upcoming voting system that will drive all future development of the project. The distributed decentralized consensus will measure contribution over time and hopefully allow for a long-lasting chain that will outlive us all and serve as incorruptible baseline infrastructure for the future internet.

A Network To Outlive Us All

Truly run by the individual users of the network.

QORTAL is designed to incentivize every user to run their own node on the network.  This is key for building a truly robust infrastructure that will outlive us all.

We are always looking for new contributors from the community to continue building out the future of the platform. Get involved with the QORTAL community to become part of the future.

Many features on top of the ones that are already existing on the chain will continue to be added. From data storage and web hosting to the voting system that will help steer the future of the platform.

Security From The Ground Up

Completely written from scratch, QORTAL’s code is not a fork of another blockchain project.  It was coded to be in line with the first principles of the original cypherpunk movement which means security by the people for the people.

Besides the open-source and completely custom codebase, QORTAL is also built to work on its own open-source hardware independent from centralized corporate manufacturers who have built backdoors directly into their hardware to spy on everyone who uses them.

While currently working with raspberry pi’s, there are other enterprising individuals developing new and unique computers that will be specifically designed to work with QORTAL.  From the networking side to the data processing, everything is completely secure.

Qortal’s Data Network (QDN) is the first of its kind to utilize a blockchain ledger to secure the data, without putting the data itself on the chain. This allows for the data to be scale-able to the level that will be required to rebuild the internet, while also retaining the security inherent to a blockchain. Every piece of data on QDN is encrypted, and chunked. Every piece of data is hashed, those hashes are put into a file with a list of hashes, then a single hash is published on the chain. This allows for total scalability of the data network long into the future.

Qortal’s data network puts the control of every piece of data completely into the USER’S HANDS. No more can anything be censored, blocked access to, or taken down. QDN hosted websites are unable to be hacked, unable to be censored, and hosted indefinitely. A one-time name registration fee for the creation of a name on Qortal (that is used as a ‘username’ and a ‘domain’ on Qortal) is all that is required, after that even putting the hashes onto the Qortal blockchain is completely fee-less. Host your website for free, forever, in an un-hackable fashion on QDN.

The Qortal Blockchain project aims to bring a completely decentralized internet infrastructure backed by a worldwide, fair economic system based on individual input by each user.

The Trade Portal, the first main application aside from Qortal’s Q-Chat communications platform, is now live.

There is no need anymore to let go of control over your precious crypto coins in order to trade. Qortal’s Trade Portal does completely cross-chain trades, automated for ease-of-use, with the Litecoin (LTC), Doge (DOGE), DigiByte (DGB) & Ravencoin (RVN) blockchains right now, and will do many other coins in the future.

We are currently about to launch our first privacy coin pair with Pirate Chain (ARRR) and have plans to be incorporating our own Zero Knowledge Proof protocol for QORT in the near future as well.

Qortal Network launched with a completely decentralized communications system Q-Chat. At the moment it utilizes text based chat only, however in the future there will be voice and video communications and screen share, so that it can fully replace other communications platforms such as slack.

Groups and group chats are also possible, at the moment group chat is not fully encrypted, but is base58 encoded. There will be full encryption in the future.

Private Messages (PMs) on Q-Chat are not only completely encrypted, but also completely decentralized, leaving no potential for messages to be modified by a centralized service provider, no ability to censor on behalf of any user, and no centralized oversight or administration.

The whole concept of the Qortal network, is the building of a truly decentralized internet based on fairness. Backed by an economic system that is worldwide, fair, and totally honest.

The system itself is honest, transparent, and completely custom.

Based on votes by leveled accounts, the system will be completely fair in both the future development and future decisions that can be made by vote of the users on the platform.

Aiming to build the world’s most honest and transparent User-Run worldwide platform to run the future digital world.

Secure Infrastructure for the Next Technological Generation

QORTAL will bring back individual sovereignty to the people of the world. It will rebuild the internet in an unhackable fashion, it will resolve devastation caused by exchange hacks and thefts and it will build a new worldwide economic system based on honesty, openness, trustlessness, and transparency. The network will utilize voting to determine the outcome in situations presented, with votes weighted based on network input over time. It’s A FAIR SYSTEM, with room for everyone to earn their place!

The existing internet and non-existent fair worldwide economic system, combined with the huge issue of large companies owning nearly everything and only getting bigger and controlling more and more… are huge issues that need resolution. Introducing to the world, QORTAL, wherein solutions to all of these issues and MUCH MORE can be found or created. Input from the community is ESSENTIAL to the underlying model and is how development will be carried out on QORTAL for years to come.

This phase is about the establishment and growth of the base level of QORTAL, which heavily points toward ‘The Minters’.

Along with a revolutionary P2P on-chain communication tool called Q-Chat which does not require fees to use (other than the 0.001 QORT fee to join/create groups)!

The Trade Portal of QORTAL was created to completely REMOVE centralized entities from the act of making trades in financial markets.

It has the capability to rebuild exchanges in this fashion, wherein there is NO AUTHORITY over the TRADES taking place on the portal. Every trade is DIRECT P2P utilizing http://ciyam.org/at platform for SmartContracts, and a custom written (as everything on QORTAL is) ‘Trade Bot’ (for lack of a better term) running on each individual node that automates the multiple stages involved in a TRUE cross-chain coin trade, so that the Trade Portal is as simple to use as any centralized trade service but without any of the risks involved in those services.

Directly CROSS-CHAIN with NO INTERMEDIARY. A Trader utilizing the Trade Portal, NEVER HAS TO LET GO OF CONTROL OVER THEIR COINS IN ORDER TO TRADE. Currently supporting P2P trades of QORT with LTC & DOGE. Pirate Chain, Raven Coin & Digibyte coming soon…

Phase 3 of QORTAL’s Data Network has launched! We launched beta to support static websites first.  You can now upload and host your immutable website for free! The end-goal is to create the base-layer for the new decentralized internet.

QORTAL Data Network (QDN) has started with the ability to store private user data with websites and avatars and will shortly be followed with application data. Finally, the full-spectrum data storage layer will launch later this year. Current data limit is 350mb, soon to be 4gb, and eventually limitless!

While every fine detail of this system isn’t complete, work is moving fast. Once full conceptualization has completed and everything has been worked out, details will begin to emerge on this website and the QORTAL Wiki!